Ocotea quixos is a species of evergreen tree in the family Lauraceae, native to Ecuador and Colombia. It is one of the South American trees with a cinnamon-like aroma and is used as a spice called ispinku in Southern Quechua[1] or ishpinku in Kichwa (Hispanicized spellings ishpingo, eshpingo).[2]

Ispinku seeds have a diameter of almost 1 inch[3] and grow in soil which is mildly acidic. It grows at an annual rate of roughly 6 inches for the first three years of its life.[3] After flowering starts, the flowers are produced once every two years.[4]

The bark is used to produce 'Ecuadorian' (or 'American') cinnamon which bears some resemblance to common cinnamon (which also comes from a tree in this family).[5] The tree is known in Quechua languages as ispinku, which specifically refers to the flowers,[4] and more recently as Flor de Canela.[6]

The taste of Ecuadorian cinnamon is thought to come from the presence of methyl cinnamate and trans-cinnamaldehyde which are also found in the essential oils which come from the flower calices of the plant.

Some reports show it has been used as a flavouring since Incaic times, and modern Ecuadorians still use this spice during general cooking and the production of food for rituals. Offerings to family ancestors for example, sometimes include food such as mazamorra morada (purple pudding) and beverages such as the alcoholic drink alajua, both of which require the use of ispinku as a key ingredient.[2] 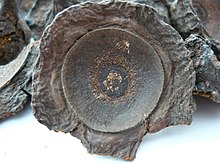 The oils have previously been used in the traditional medicine of some Amazonian tribes for their anti-inflammatory properties and some peer-reviewed data also support this theory. Investigation of trans-cinnamaldehyde showed that it significantly reduced the production of NO by macrophages (cells of the immune system), which is something that normally occurs during inflammation. The same study of methyl cinnamate did not show this effect.[7] It has also been shown that this oil can reduce the chance of blood clot formation by preventing platelet aggregation in the blood.[8]