These seeds are from the purple cultivar of star apple.  They were grown in Florida and have a sweet flavor which might be described as a cow's milk mixed with grapes (flavor score: 7/10).

Chrysophyllum cainito is a tropical tree of the family Sapotaceae. It is native to the Isthmus of Panama, where it was domesticated.[1] It has spread to the Greater Antilles and the West Indies and is now grown throughout the tropics, including Southeast Asia.[2] It grows rapidly and reaches 20 meters in height. 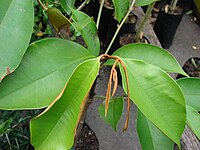 The leaves are evergreen, alternate, simple oval, entire, 5–15 cm long; the underside shines with a golden color when seen from a distance. The tiny flowers are purplish white and have a sweet fragrant smell. The tree is also hermaphroditic (self-fertile). It produces a strong odor. 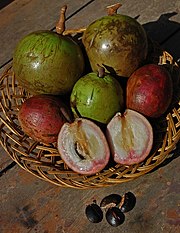 Fruits, usually purple, are also available in green or red

The fruit is globose and typically measures from 2 to 3 inches in diameter.[4] When ripe, it usually has purple skin with a faint green area appearing around the calyx. A radiating star pattern is visible in the pulp. Greenish-white and yellow-fruited cultivars are sometimes available. The skin is rich in latex, and both it and the rind are not edible. The flattened seeds are light brown and hard. It is a seasonal fruit bearing tree.

The fruits are used as a fresh dessert fruit; it is sweet and often served chilled. Infusions of the leaves have been used against diabetes and articular rheumatism. The fruit has antioxidant properties.[5][6] The bark is considered a tonic and stimulant, and a bark decoction is used as an antitussive. The fruit also exists in three colors, dark purple, greenish brown and yellow. The purple fruit has a denser skin and texture while the greenish brown fruit has a thin skin and a more liquid pulp; the yellow variety is less common and difficult to find.

A number of closely related species, also called star apples, are grown in Africa including C. albidum and C. africanum.[7]