Capsicum frutescens is a wild chili pepper having genetic proximity to the cultivated pepper Capsicum sinense native to Central and South America.[2] Pepper cultivars of C. frutescens can be annual or short-lived perennial plants. Flowers are white with a greenish white or greenish yellow corolla, and are either insect- or self-pollinated. The plants' berries typically grow erect; ellipsoid-conical to lanceoloid shaped. They are usually very small and pungent, growing 10–20 millimetres (0.39–0.79 in) long and 3–7 millimetres (0.12–0.28 in) in diameter.[3] Fruit typically grows a pale yellow and matures to a bright red, but can also be other colors. C. frutescens has a smaller variety of shapes compared to other Capsicum species. C. frutescens has been bred to produce ornamental strains because of its large quantities of erect peppers growing in colorful ripening patterns.[2] 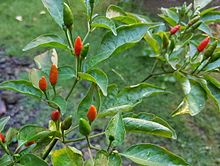 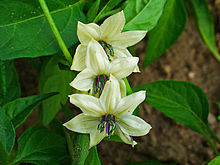 According to Richard Pankhurst, C. frutescens (known as barbaré) was so important to the national cuisine of Ethiopia, at least as early as the 19th century, "that it was cultivated extensively in the warmer areas wherever the soil was suitable."[10] Although it was grown in every province, barbaré was especially extensive in Yejju, "which supplied much of Showa as well as other neighbouring provinces". He singles out the upper Golima River valley as almost entirely devoted to cultivating this plant, where thousands of acres were devoted to the plant and it was harvested year-round.[11]

This pepper is common in eastern and southern India where it grows readily in a favorable climate. It is known locally by various common names.[12]

Capsaicin, the main chemical substance responsible for the hot sensation

Helicoverpa assulta is one of very few insects that can successfully feed on the red pepper because it can tolerate capsaicin.[13]